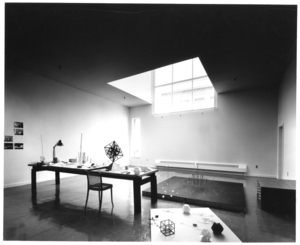 György Kepes was MIT’s first tenured artist, a pioneer of interdisciplinary collaboration, and the founder of the Center for Advanced Visual Studies. But despite his success relating artistic, scientific, and technological research at MIT, his tenure was also defined by backlash and controversy. Kepes found himself entangled in a new military-industrial-aesthetic complex during the Vietnam War era.

In this talk and discussion, John R. Blakinger shares from his book György Kepes: Undreaming the Bauhaus (MIT Press, 2019) — the first comprehensive study of artist, designer, and visual theorist György Kepes’s career in the US. Blakinger demonstrates the profound resistance Kepes faced while trying to “undream” the Bauhaus into reality at MIT in the early years of the Cold War. This discussion focuses specifically on Kepes’s complex and contradictory relationship with MIT through various projects completed at the Institute from 1946 until his retirement in 1974.

This event is cohosted by the History, Theory, and Criticism Section, Department of Architecture at MIT.