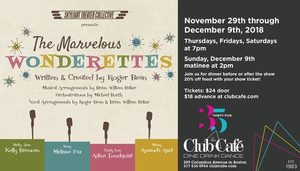 Skylight Theater Collective presents THE MARVELOUS WONDERETTES, a hilarious four-woman juke-box musical, featuring many classic 50’s and 60’s pop songs. The show bops along with tremendous energy as the story weaves the numbers into a mounting comedy of interpersonal drama.

At the heart of the story are the Wonderettes themselves, each one funnier and more charming than the next. The first act sees them performing at their senior prom, as they bicker onstage between songs like “Mr. Sandman,” “Lollipop,” and “Stupid Cupid.” Act Two jumps forward to their 10 year high school reunion, where they catch up on the trials and tribulations of adult life and sing songs such as “Heatwave,” “It’s My Party,” and “Son of a Preacher Man.”