The Mark Harvey Group, Livestream CD Release, A Rite for All Souls 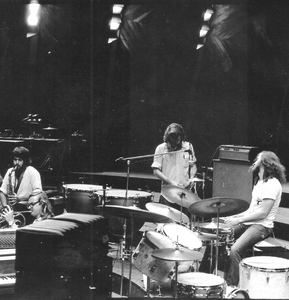 In a virtual CD release event via Zoom, veteran jazz writer Bob Blumenthal will interview Mark Harvey and Peter H. Bloom and play excerpts from their new CD A Rite for All Souls.

A Rite for All Souls is a newly discovered recording of 1971 concert by the trailblazing Mark Harvey Group (Mark Harvey, brasswinds; Peter H. Bloom, woodwinds; and their late colleagues Craig Ellis and Michael Standish, percussion). The disc has been called “extraordinary” (JazzPress Poland), “a potent thing to behold” (AllAboutJazz.com), and “a beautiful musical and historical document” (MusicZoom, Italy). Donald Elfman (The New York City Jazz Record) wrote, “A Rite for All Souls is a deeply engaging series of improvisations, sound worlds and rich musical expression," while Joseph Neff (The Vinyl District) called the recording “…a fascinating and robust snapshot of street-level jazz and poetry as a vehicle for social commentary and positive change…. everybody plays at a high level throughout.” Jon Ross (Ear Relevant) wrote, “The new album from The Mark Harvey Group, A Rite for All Souls (Americas Musicworks), captures a seminal live show from 1971….an indelible recording that characterizes the immediacy of free-jazz protest music at a consequential time in American history.…a release for the times, bringing the free jazz language of social justice to the fore.”

Mark Harvey has been an uncompromising explorer of new sonic territories for decades. He has performed in Dave Douglas’s Festival of New Trumpet Music; appeared at the Knitting Factory, the Village Gate, the Public Theater, Roulette, the Berlin Jazz Festival, and the Baja State Theater (Mexico) among others; and shared the stage with Jaki Byard, Geri Allen, Ricky Ford and other luminaries. Among Harvey’s 200 works are pieces written for and premiered with jazz legends Joe Lovano, Sheila Jordan, Steve Turre, Jimmy Giuffre, and Ran Blake. Harvey is founder and music director of the internationally acclaimed Aardvark Jazz Orchestra now in its 48th season. Donald Elfman (The New York City Jazz Record ) described Harvey’s playing on A Rite for All Souls, “Harvey is strange and wonderful on trumpet, punctuated by delicate percussion sounds…[he] spreads his palate on trumpet and makes intensely intimate use of silence as a kind of outlining device to highlight his distinctive sounds.”

Peter H. Bloom has performed widely across multiple genres in a career spanning five decades. He has performed with Mark Harvey since 1969, has been a member of The Aardvark Jazz Orchestra since 1976, has played with FiLmprov since its creation in 1996, and is a founding member of the jazz and tap ensemble, the Modernistics. He has led his own jazz groups for decades. Jazz Improv praised his “exquisite melody…the improvisations growing organically out of the theme,” while Troy Dostert (AllAboutJazz.com) wrote, “Peter Bloom is featured on Rite, and his expansive creativity on a range of saxophones is one of the delights of this recording.” As a recitalist and chamber musician, Bloom has toured the globe. He performs with Ensemble Aubade, Fortunato Ensemble, Ensemble Chaconne, the Henning Ensemble, and other groups. Composers such as Elliott Schwartz, Richard Cornell, Elizabeth Vercoe, Narong Prangcharoen, Karl Henning, Pamela Marshall, and Richard Nelson have written for him. His discography of 47 recordings includes Sony Classical, Navona, Dorian, Leo Records, 9Winds, and other labels.

Craig Ellis and Michael Standish are an elemental force in A Rite for All Souls. As Jon Ross notes in Ear Relevant, “percussion permeates the performance.” Donald Elfman (The New York City Jazz Record) hails percussionists Ellis and Standish as “vital to the power of the music,” while Jonathan Blackman (Occhi Magazine) praises “the percussion playing of Craig Ellis and Michael Standish, who support with colors that match the sounds, sometimes supporting or leading with pulsating rhythms, and the most profound part of their playing is their intuitive sense of knowing when to not play.”

Bob Blumenthal’s career spans more than five decades as a jazz writer and historian. He was a contributing editor of The Boston Phoenix (1969-1989) and has written jazz criticism for The Boston Globe (1990-2002), The Atlantic Monthly, Rolling Stone, The Village Voice, Down Beat, JazzTimes and Jazziz. His first book, Jazz: An Introduction to the History and Legends Behind America’s Music (2007, (HarperCollins/Smithsonian) was hailed as “the single best compact introduction to jazz currently available” by the Wall Street Journal. His second book, Saxophone Colossus: A Portrait of Sonny Rollins (Abrams), in collaboration with photographer John Abbott, was published in 2010. Blumenthal has written hundreds of album notes and won two Grammy awards for best album notes for collections by John Coltrane and Miles Davis. He has provided radio and television commentary for American and Canadian media and served as a panelist for festivals in Europe, the Caribbean and South America. He received a Lifetime Achievement Award from the Jazz Journalists Association in 2005.