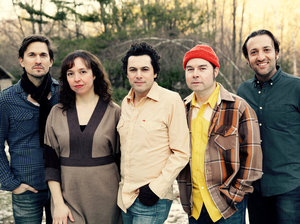 Indie-roots trailblazers, The Mammals, are a high-octane Americana quintet from New York’s storied Hudson Valley carrying on the work of Pete Seeger & Woody Guthrie with a deep original repertoire, searing American roots sound and a message of hope for humanity.

Known for their jubilant, high-energy shows, The Mammals deftly move from older-than-dirt banjo duets to sound-the-alarm topical fare that’s right in line with the times, bouncing from rafter raising hoe-downs to hear-a-pin-drop a cappella balladry.

Founded in 2001 by Seeger’s grandson, Tao, second generation fiddler/singer, Ruth Ungar, and multi-instrumental wordsmith, Mike Merenda, the original trio enjoyed a remarkable seven year run that brought them to the largest folk festivals across North America, Australia and Denmark: Nashville’s Ryman Auditorium (with stringband peers Nickel Creek), New York’s Carnegie Hall, as the special guest of folk legend Arlo Guthrie, and the pages of numerous publications lauding their unique “traditional-music-in-combat-boots-sound,” including a feature in The New York Times that handpicked them as a leader in a pack of new-wave string bands “updating that old-time sound.”

The group took a break, during which time Merenda and Ungar married and started a family, a bi-annual folk festival and a musical duo aptly called Mike + Ruthy. Seeger pursued a solo career before retiring from music all together to start a family of his own. But The Mammals returned, fronted by Merenda and Ungar, in 2017 “stronger than ever” (Folk Alley) with a pair of politically charged singles, “Culture War” and “My Baby Drinks Water,” and the announcement of a new album in 2018.

The new album, Sunshiner, bottles The Mammals’ on-stage effervescence and lyrical intellect along with some very beautiful studio magic. Sunshiner bursts open with the soaring, up-tempo idealism of Merenda’s “Make It True.” It echoes The Byrds and then takes a more modern, Feist-inspired, turn with Ungar’s soulful plea, “Open The Door.”

Over a decade ago, the Washington Post described The Mammals as, “gleefully aware that the sound barriers separating old-timey music, vintage pop and contemporary folk are as permeable as cotton.” This new record has that same tag-you’re-it playfulness with genre on full display, even evoking Laura Nyro on the intimate, spine-tingling piano trance “Stayin’ Up Late.”

“It’s basically ‘think, dance, feel,’” says Ungar of the repertoire on Sunshiner. Songs like “Culture War,” “Beautiful One,” “My Baby Drinks Water” and the title track directly explore the troubling rifts between people and planet. Then it’s time to whoop up a ruckus on “Doctor’s Orders” and “Fork In The Road” with fiddle, banjo, guitar, bass and drums as if to stomp the last shreds of worry into oblivion. And it’s no secret that some of their songs, particularly Ungar’s earthy blues and jazz-tinged numbers like “Maple Leaf” and “When My Story Ends” will make a grown mammal cry. And that’s ok, too. It’s all part of working our way through this tricky chapter of human history.

Whatever political twists and turns may occur this year, 2018 promises to be an adventurous time for The Mammals. In February they strike out on a Western Migration Tour across the USA from their home in Woodstock, NY and down the entire West Coast, from Bellingham to San Diego. In the Spring they embark on a Sunshiner CD Release Tour through New England and the Midwest before playing some of their favorite summer festivals in WA, WY, VT, MA and NY, including their own Summer Hoot, now in its sixth year.

The Mammals treasure the timeless traditions of song, story-telling and dance. Their work is to continue a musical odyssey so that the same handmade music passed down to them makes it thru to future generations one song, one concert at a time.