The Lox: A Celebration of 20 Years of "MONEY POWER RESPECT" 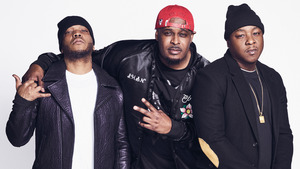 The Lox (stylized The LOX or The L.O.X.) - an acronym for Living Off eXperience – was formed in Yonkers (New York) in 1994 and is a trio consisting of Sheek Louch, Styles P, and Jadakiss. They’re high school friends who started performing together at local shows and producing their own demos. One of their demos eventually made its way to Diddy (Sean "Puffy" Combs) who signed them onto his record label (Bad Boy Records). They released their debut album (Money, Power and Respect) in 1998 and it topped Billboard’s Top R&B and Hip Hop Albums chart and hit #3 on the US Billboard 200 chart. It went on to achieve Gold status in the US and Platinum in Canada. Their next album (We Are the Streets) hit #2 and #5 on the aforementioned charts and went Gold in the US. Their latest album (Filthy America... It's Beautiful) came out 16 years after We Are The Streets. Styles P. said in an interview, "I would say [this project is] more for our core fan base but with a newer feel. Same vibe, music, but we didn't go with old school-sounding beats. We not trying to sell you the '90s. We just selling you good rap.”