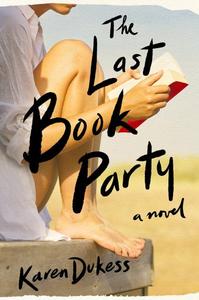 Join Karen Dukess and Whitney Scharer (The Age of Light) for a reading and Q&A at the Trident as we celebrate the launch of The Last Book Party!

In the summer of 1987, 25-year-old Eve Rosen is an aspiring writer languishing in a low-level assistant job, unable to shake the shadow of growing up with her brilliant brother. With her professional ambitions floundering, Eve jumps at the chance to attend an early summer gathering at the Cape Cod home of famed New Yorker writer Henry Grey and his poet wife, Tillie. Dazzled by the guests and her burgeoning crush on the hosts’ artistic son, Eve lands a new job as Henry Grey’s research assistant and an invitation to Henry and Tillie’s exclusive and famed "Book Party"— where attendees dress as literary characters. But by the night of the party, Eve discovers uncomfortable truths about her summer entanglements and understands that the literary world she so desperately wanted to be a part of is not at all what it seems.

A page-turning, coming-of-age story, written with a lyrical sense of place and a profound appreciation for the sustaining power of books, Karen Dukess's The Last Book Party shows what happens when youth and experience collide and what it takes to find your own voice.

Karen Dukess: With a background in newspaper and magazine journalism, Karen Dukess spent eight years as a speechwriter on gender equality at the United Nations Development Programme. She is a graduate of Brown University and the Columbia University Graduate School of Journalism and lives in Pelham, New York.

Whitney Scharer received her MFA in creative writing from the University of Washington in 2004. Her short fiction has appeared in numerous journals including New Flash Fiction Review, Cimarron Review, and Bellevue Literary Review. Originally from Colorado, she now lives outside Boston with her family. Her first novel, The Age of Light, based on the life of pioneering photographer Lee Miller, was published by Little, Brown (US) and Picador (UK) in February, 2019.