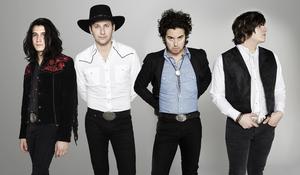 The Last Bandoleros are a four-piece outfit that blends Tex-Mex, country, and rock ’n’ roll.

Their story began in San Antonio, Texas, with guitarist/producer Jerry Fuentes, who, during a musical pilgrimage to Manhattan, happened to meet singer-songwriter/producer and New York native Derek James. Fuentes and James soon began collaborating in Brooklyn.

However, Fuentes was drawn to his native Texas to record in the same San Antonio studio where a couple of talented brothers also were emerging. Diego and Emilio Navaira, sons of Tejano music legend Emilio Navaira Sr., were making a name for themselves around town with energetic live performances and sterling vocal chops.

Fuentes decided to combine both universes, introducing James to the Navaira brothers and inviting them to joint sessions in Brooklyn and San Antonio. Riffs and lyrics began flying fast, and the Last Bandoleros were born.