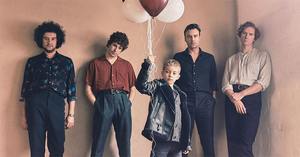 Arriving a good decade after the peak of Brit-pop, new-millennial rockers the Kooks revived that knowing, catchy clatter in the mid-2000s. Their debut, Inside In/Inside Out, appeared in 2006, the same year as the Arctic Monkeys' debut -- the two bands may have been mild rivals but their near-simultaneous debuts did represent the birth of a new generation of British guitar bands, one as indebted to the Strokes as it was to classic rock -- and the album was a major hit in their native U.K., peaking at number two on its way toward quadruple platinum. Success came easy, but it was slightly hard to maintain. Konk, their 2008 sophomore album, entered the U.K. charts at number one but slid down rather quickly, and 2011's Junk of the Heart didn't revive their fortunes, but the quartet stuck to it, re-emerging in 2014 with Listen, a record that found them broadening their sound to encompass soul, dance, and new wave while retaining a love of the classic British pop/rock that was at their foundation since their inception.

That inception happened in 2004, when vocalist/guitarist Luke Pritchard, guitarist Hugh Harris, bassist Max Rafferty, and drummer Paul Garred formed at Brighton Music College. Realizing they shared similar tastes, they took their name from a song on David Bowie's Hunky Dory and recorded a demo tape that, along with a handful of gigs, soon gathered interest from several record labels. Four months after their formation, the group signed with Virgin Records. They recorded their debut, Inside In/Inside Out, in 2005 -- two singles, "Eddie's Gun" and "Sofa Song," appeared over the course of the year -- and it was released in January 2006. Debuting at nine on the U.K. charts, it climbed its way to two as "You Don't Love Me" reached 12, while "Naïve" and "She Moves in Her Own Way" cracked the U.K. Top Ten. All these hits helped Inside In/Inside Out achieve quadruple-platinum status in the U.K., but the album didn't attract much notice in America once it was released in October of that year; it did well in Australia, however, earning a platinum certification.

As the Kooks began prepping their second album in early 2008, bassist Rafferty was fired; his temporary replacement was Dan Logan, who'd previously played with Cat the Dog. Konk, named after the studio where it was recorded (a studio owned by the Kinks' Ray Davies), appeared amidst this turmoil in April 2008. It debuted at number one on the U.K. charts -- and peaked at 41 in the U.S. -- but ultimately it didn't perform as well as the debut, with just the lead single "Always Where I Need to Be" reaching the Top Ten; it would eventually be certified gold in the U.K.. By the end of the year, Peter Denton joined as bassist. During the recording of their third album in 2009, drummer Garred departed; the band cycled through replacements in the studio and stage before settling on Alexis Nunez. Garred finished up sessions for their third album, Junk of the Heart, which also saw the band reuniting with their original producer, Tony Hoffer.

Junk of the Heart saw the Kooks smooth up their sound but it didn't pay off commercially; it debuted at ten on the British charts but generated no hit singles. Conscious that it was time for a change of pace, the band hired London hip-hop producer Inflo to helm 2014's Listen, which was also their first to feature Nunez on drums. The resulting record bore stronger dance, soul, and electronic influences without jettisoning pop. It was released internationally in September 2014, debuting at 16 on the U.K. charts and 85 in the U.S. In 2017, the band reconvened for an ambitious "best-of" tour in support of the release of the career-spanning The Best of... So Far compilation. The following year, they issued their fifth LP, Let's Go Sunshine, which featured the singles "No Pressure" and "All the Time."