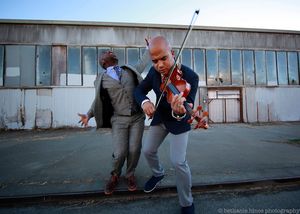 The Just and the Blind is one of the most unique and powerfully urgent works that we’re presenting this season. This multimedia journey of poetry, music, dance, photography, and projected animation sold out its commissioned premiere at Carnegie Hall, and it’s now touring the country’s most significant cultural centers. Conceived, written, and narrated by the captivating spoken-word artist Marc Bamuthi Joseph, The Just and the Blind “explore[s] themes of racial profiling, sentencing, and the prison-industrial complex from the perspective of fathers of Black and Brown children… centered on the humanity of the historically marginalized, provid[ing] a framework for the unique voices of the community, striving to humanize the Black and Brown children who are enmeshed in it.”

The work features live, original music by composer and multi-instrumentalist Daniel Bernard Roumain, a boundary-defying musician whose high-profile collaborations include such varied artists as Philip Glass, Bill T. Jones, Savion Glover, and Lady Gaga. Another standout member of the collaborative project is choreographer and dancer Drew Dollaz, a self-taught pioneer of the Brooklyn-based street dance style known as “flexing,” who further infuses the genre with ballet and beyond in his transfixing world of movement. Also joining them will be a special, to-be-announced vocalist taking on the performance’s lone and sought-after rotating spot. The experience of The Just and the Blind is more than the sum of these already impressive parts, and we encourage everyone to join us for its Boston premiere.

Reddit
02/04/2022 20:00:00 02/04/2022 22:00:00 America/New_York The Just and the Blind Boston Premiere Conceived & written by Marc Bamuthi Joseph Original music by Daniel Bernard Roumain Directed by Michael John Garcés The Just and the Blind is one of the most unique and powerfully urgent works that we’re presenting this season. This multimedia journey of poetry, music, dance, photography, and projected animation... Emerson Paramount Center, Boston, MA 02111 false DD/MM/YYYY