"The Island That Nobody Knows" Gallery Opening 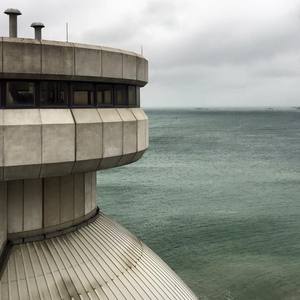 Join us on Tuesday, September 12, from 6:00 until 8:00pm for the opening of Mark Lamster’s “The Island That Nobody Knows,” an exhibition of photographs of Deer Island. Lamster, who is the architecture critic for the Dallas Morning News, documented the treatment plant during his year as a Loeb Fellow at Harvard.

The Island Nobody Knows
For more than three centuries, Deer Island has been the place where Boston has put the things it would rather not think about. It has been a concentration camp for Native Americans, a women’s prison, and a fortress against invasion from the sea. Recently, it achieved notoriety when the body of a young murder victim, Bella Bond, washed up on its shores.Today, it is site of the Deer Island Wastewater Management Plant, a masterwork of infrastructural design that opened in 1995, after a federal court mandated the clean-up of Boston Harbor. On an average day, the Deer Island plant treats some 350 million gallons of sewage; in the event of a storm surge it can treat up to 1.3 billion gallons per day.
The plant is most recognizable for its twelve egg-shaped digesters, each 130 feet tall, which thickens sludge so that it can be converted into fertilizer. Contaminated water is purified over ten to fifteen days as it is fed through a series of “batteries,” or pools, where it is gradually aerated and cleansed before it is returned to Massachusetts Bay by a 9.5 mile, twenty-four-foot-wide, gravity-fed tunnel. Below the plant’s surface is a secret world of labyrinthine galleries, colorful machinery, and electric vehicles that looks like nothing so much as the lair of a James Bond villain. But nobody at Deer Island is trying to blow up the world. It is operated, instead, by a cadre of engineers and tradesman dedicated to keeping Boston’s water clean in times pleasant and severe.

Mark Lamster is the architecture critic of the Dallas Morning News and a professor at the University of Texas at Arlington School of Architecture. The photographs of Deer Island were taken over the last year while he was a Loeb Fellow at the Harvard Graduate School of Design. He is currently at work on a biography of the late architect Philip Johnson, to be published next fall by Little, Brown.