The Importance of Being Earnest at the Footlight Club 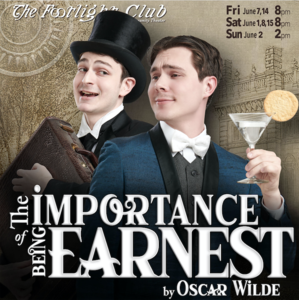 The Footlight Club, America’s oldest continuously operating community theater and one of Jamaica Plain’s hidden gems, is proud to announce its final show of its 142nd season: Oscar Wilde’s “The Importance of Being Earnest”, for six performances this June at its Eliot Hall home, 7A Eliot St, Jamaica Plain.

A farcical comedy set in late Victorian era London, in which the leading characters maintain fictitious personae to escape burdensome social obligations, the play is widely considered to be Wilde’s masterpiece, as well as the most often revived of his plays. The Importance of Being Earnest” brought Wilde to the peak of his career, mere months before his reputations would come crashing down, forcing the show to close out its West End debut only months after opening.