The Healing Power of Makam: Sound Explorations in Turkish Music 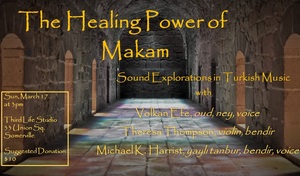 The Healing Power of Makam: Sound Explorations in Turkish Music

Makam is a system of melodic structures used in Turkish Classical Music and has a complex set of rules for composition and performance. Between the 10th and 19th centuries, Makams were used extensively during the Seljuk and Ottoman eras to support both physical and psychological healing and were played by small groups of musicians in hospitals. Throughout history, and now today within the field of music therapy, Makams have been a topic of research.

In this first concert of our project, we will be introducing the makams Rast and Uşşak, discussing their effects on human and playing improvisations as well as vocal and instrumental pieces in these makams. The event will also involve audience participation.

Note: The background image is from Gevher Nesibe Hospital, Kayseri, Turkey founded in 1206, where music sound was broadcast to patients’ rooms through air corridors.