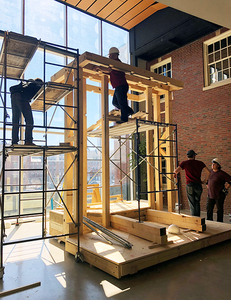 Free, public lecture will detail on the Hancock Mansion’s unique place as a catalyst for America’s preservation movement, and how North Bennet Street School students recreated the massive 10x10x13′ entryway, and view it in person for yourself.

North Bennet Street School's Preservation Carpentry class of 2019, in partnership with The Bostonian Society, have collaborated to recreate the formal front entryway (frontispiece) to the John Hancock Mansion, formerly on Beacon Hill.

Originally built in 1737, the Georgian home came to be the lifetime residence of the first signer of the Declaration of Independence. In 1863 the land on which the home was sitting was sold to developers. The house was disassembled, and many of its architectural components were auctioned off. Pieces of the Hancock Mansion became part of museum collections throughout New England.

Last year, NBSS students completed and installed Phase I of the Hancock Mansion Door Project for an exhibit at Boston's Old State House. The work included the conservation of the mansion's original front door, along with reproducing immense pillars, intricately carved brackets, and portico roof covering.

The Preservation Carpentry class is currently completing Phase II of this project onsite at NBSS. This work encompasses the second story of the mansion's entryway which starts at the roof of the portico and includes the balustrade with rope-turned posts with flame finals, doubled fluted pilasters in front of faux sandstone quoins, and keystones that surround 16 light french doors.

Free and open to the public. Please RSVP at nbss.edu/calendar.