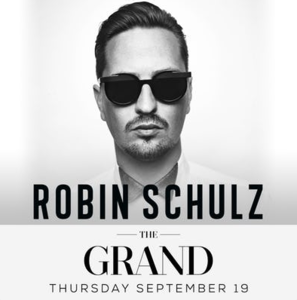 The Grand and Big Night Entertainment Group are excited to announce an unbeatable lineup for the I Love Mondays series in September, as well as performances every Thursday, Friday, and Saturday night.

Robin Schulz, a German DJ and producer, has topped the worldwide charts in over 20 countries with songs such as his remix of “Waves (feat. Mr. Probz)”. Boasting sold-out tours throughout Europe, America, Asia and Australia, Schulz has played some of the most renowned festivals around the globe such as Miami’s Ultra Music, Tomorrowland and sought-after residencies in Ibiza and Laz Vegas.