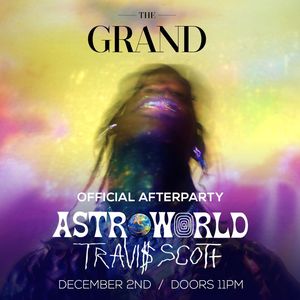 “When you hustle, always make it fancy” with Travis Scott at Boston’s premier nightclub, The Grand, on Sunday, December 2nd at the ASTROWORLD Afterparty.

The Houston-born hip-hop artist and producer has climbed the charts with numerous platinum singles and countless features. Travis Scott started his career as a producer for Kayne West’s G.O.O.D. Music label and is credited with producing platinum singles such as “Bitch Better Have My Money” by Rihanna and “Portland” by Drake. In August 2018, Scott released his third studio album, “ASTROWORLD”, which debuted at number one and featured three chart-topping singles with all 17 tracks entering on the Billboard Hot 100. The album has been certified Platinum and includes guest vocals from Kid Cudi, Frank Ocean, Drake, The Weeknd, 21 Savage, and more. The ASTROWORLD Tour began in November and the show is modeled from an amusement park with actual rides on stage such as a Ferris wheel and a roller coaster.

This event is 21+ with a valid ID and tickets start at $40. Bottle service packages include top-shelf brands like Veuve Cliquot and Hennessey, superior service and unbeatable dancefloor views.