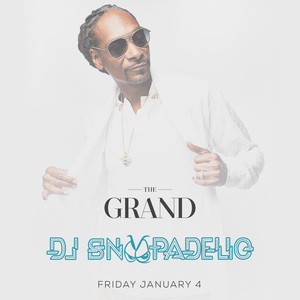 “Drop it like it’s hot” at The Grand on Friday, January 4th with DJ Snoopadelic A.K.A. Snoop Dogg.

Originally from Long Beach, California, rap legend Snoop Dogg was first discovered by Dr. Dre in early 1990. Since his start, Snoop Dogg has gone on to global fame, tens of millions record sales, and a career in TV and movies. His first album, Doggystyle, made its way to number 1 on Billboard’s hip-hop and Top 200 charts. Throughout his career, Snoop has produced chart-topping hits including “Gin & Juice”, “Nuthin’ But A ‘G’ Thang”, “Drop It Like It’s Hot” and “I Wanna Rock”. He has sold over 23 million albums in the United States and 35 million albums worldwide. Most recently, Snoop has taken on the persona “DJ Snoopadelic”, spinning at festivals and clubs around the world to give fans a unique experience showcasing the different extensions of his personality and taste. DJ Snoopadelic has held a residency at acclaimed Las Vegas club, TAO, as well as released Loose Joints, his first electronic music album.

This event is 21+ with a valid ID and tickets start at $50. Bottle service packages include top-shelf brands like Veuve Cliquot and Hennessey, superior service and unbeatable dancefloor views. Reserve your exclusive table at https://www.tablelist.com/e/dj-snoopadelic-or-the-grand-boston-1419-at-the-grand-boston-d2e9f0bdb31050cb