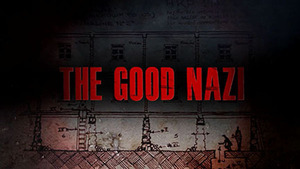 In 1943, as The Vilna Ghetto is about to be liquidated, Nazi officer Major Karl Plagge makes a decision to risk his own life and save the lives of Vilna's Jews. For decades, Plagge's incredible heroism was relatively unknown. After Dr. Michael Good told the story of how his mother had been saved to Professor Richard Freund, the lead archeologist on the Vilnius synagogue project, they began a journey to uncover the story of the "Schindler of Lithuania." They visited the work camp that Plagge ran, learning the stories of the people he saved and of those he could not. During their time there they learned of plans to demolish the site, emphasizing the significance of their trip and of the film they were creating. And while Plagge never knew about all of the lives he made possible, his bravery saved the lives of hundreds of Jews, including famed artist Samuel Bak.

The screening will be followed by a conversation with Samuel Bak, Dr. Michael Good, and Dr. Richard Freund.