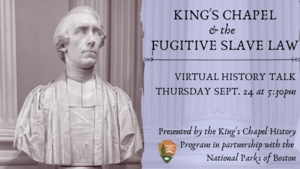 Join the King's Chapel History Program and National Parks of Boston via Zoom on Thursday September 24 at 5:30pm as we host National Park Guide William Stilwell for a special presentation exploring King's Chapel's complicated relationship with the Fugitive Slave Law of 1850.

This event is free and open to the public, but registration is required by noon on 9/24. https://zoom.us/meeting/register/tJUkfuCqqT4oGNZMu8ZffTocYyUH7ivsSCO7

In the 1850’s King’s Chapel minister Rev. Ephraim Peabody attempted to maintain a neutral and moderate political stance in an increasingly divided country. Though he kept politics out of his pulpit, it did not keep King’s Chapel away from the fight over the Fugitive Slave Law in Boston, as prominent congregation members Samuel Atkins Eliot, Benjamin Robbins Curtis, George Ticknor Curtis, and Edward Gray Loring voted for the law in congress, set the precedent for the legality of the law in the courts, and issued warrants for the arrests of fugitives in Boston, respectively. As the decade wore on, Peabody’s moderate viewpoint would become less tenable and harder to maintain and the country headed for Civil War.

William Stilwell has been with the National Parks of Boston as a Park Guide for three seasons, having previously worked at King’s Chapel and the Old North Church as museum educator.