The Frights with Vundabar 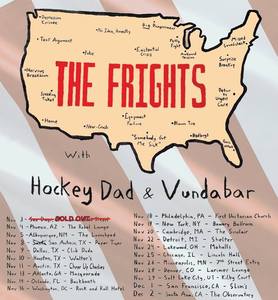 The Frights’ birth in December 2012, was an accident that now unites moms worldwide. One mom in San Diego has called the band, “Great! A fun mix of the rock n’ roll I used to love with the 50’s sounds MY mom used to love!” Another mom in Los Angeles praises the band, saying, “I hire a babysitter to go to all their shows. They just have so much youthful energy, they make me feel young too!”

Ostensibly, The Frights are great for long drives in a Honda Odyssey. Their second full-length was produced by FIDLAR’s Zac Carper and will be released soon.

Vundabar began as a recording project between Brandon Hagen and Drew McDonald during their last year in high school together. Since then it has grown into far more. In April of 2013 they released their first album ‘Antics’ independently, which was followed up with multiple US tours and their first European tour, a two month string of shows with an emphasis on Festival dates as well as club dates. They have since returned to Europe for a second tour in the fall of 2014 and are anticipating a follow up tour in the spring of 2014. All of this being said, the three current members are only between 19 and 20 years of age. The Boston trio has been described as jangle pop and often compared to the likes of The Pixies and Thee Oh Sees for their quiet/loud dynamic and pop sensibility. They’re know for their energetic live sets, and comedic approach to the performance.

Hockey Dad is a young Australian duo, arising from a small suburb on the South Coast of NSW, combining their passion for the ocean and love of 60s garage for a distinct sound of salty surf rock.