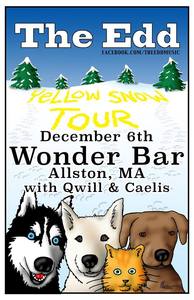 The Edd
The Edd is a psychedelic rock quartet formed in Burlington, VT in 2009. Their long awaited debut album, "I'm with Bob" was released in early 2017; showcasing 8 original songs they have been perfecting over their years of performing. The bands high-energy live shows take you on an improvisational journey through odd time signatures, funky
riffs and heavy electronic grooves. They will be performing throughout the country in late 2017 and early 2018, catch them in a city near you!

Qwill
Jesse Ciarmataro a.k.a.Qwill, is a singer, songwriter, and producer currently based in Salem, MA US.

Caelis
Latin for "to the Heavens," Caelis is a musical quest to transcend our worldly experience from the mundane to the divine, through creativity and community.