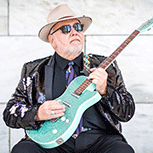 Where:
http://www.natickarts.org/performance/duke-robillard-band-2019-11-21 The Center for Arts in Natick
14 Summer Street
Natick, Massachusetts 01760

Whether it’s a song, a style, an idiom or an image, Duke Robillard will render it with mastery, power, nuance and an unerring grasp of its essence. Duke is a Grammy nominated blues guitarist and singer, a founding member of blues and swing band Roomful of Blues, a member of the Fabulous Thunderbirds (replacing Jimmie Vaughan) and has released over 30 albums under his own moniker. An accomplished bluesman, Robillard has won a handful of Blues Music Awards over the years, including Best Blues Guitarist four out of five years (2000, 2001, 2003, 2004) and most recently in 2016 for Best Acoustic Blues album of the year, The Acoustic Blues of Duke Robillard