The Devil's Twins / Walter Sickert & The ARmy of BRoken TOys 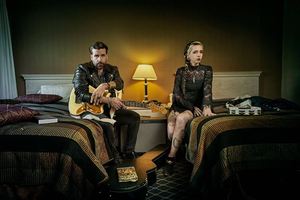 The Devils Twins
Catchy, yet haunting, dueling vocals by Nikki Coogan and Jeremiah Louf— atop a wall of sound generated by only one guitar is what defines the unique sound of the Boston-based duo The Devil’s Twins. The press and their underground cult following—The 2crew—describe their sound as “noir punk”.

"If Johnny Cash and Amy Winehouse had a baby that punched like Johnny Rotten, this would be it.” (Andy Kaufmann, Music Connection Magazine)

In support of their two underground releases—2013’s “Old Fashioned Mischief” and 2015’s “Consequences”—the Twins have shared the stage with acts such as July Talk (Island Records), Barrence Whitfield & The Savages (Bloodshot Records), and legendary punk groups such as The Adicts, The Misfits and The Casualties. They’ve gained a reputation for being an extremely high energy spectacle touching on a wide range of emotions; from explosive anger tantrums—beating guitars and tambourines into the stage—to whiskey-soaked, old fashioned rock’n'roll foot stompers, all while keeping it light between songs with playful banter between the trio and the crowd.

After winning the Boston Music Awar for Indie/Rock Artist of the Year 2016 and a string of single releases including "Little Sister Let It Run" and cover songs for Lana Del Rey's "Cola" & Roger Alan Wade's "If You gonna Be Dumb" , The Twins have announced their next release titled "AMERICAN NOIR VOL. 1" for August 2017 featuring Rock/Hip Hop crossover track "SATAN STONE" featuring the rapper/actor SLAINE.

return to the Sinclair for an unforgettable evening of music, and mayhem!

Walter Sickert & The Army of Broken Toys have a large New England following and routinely tour both the US and internationally.

The band not only executes rock shows, but have also written and performed the award-winning musical 28 Seeds with sell-out performances at the Boston Center for the Arts as well as reprising the musical Shockheaded Peter in partnership with Company One, which won several industry awards for Best Musical, Best Actor (Walter Sickert), Best Sound, and Best Artistic Design. Walter was recently honored by the Nashville Film Festival for Best Music for the score he composed for the film Some Freaks which will have its international release in August 2017.