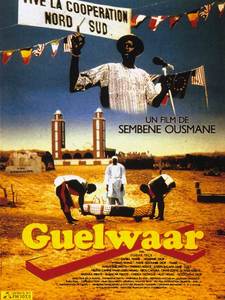 Where:
The Cooper Gallery of African and African American Art
102
Cambridge, Massachusetts 02138

The Cooper Gallery Presents our Cinema Series for ReSignifications! Carefully curated to supplement our current exhibition, these stellar films from around the world will be screened Fridays at noon through the month of April.

Our film on Friday 4/20 for our Cinema Series for ReSignifications is Guelwaar (1992) directed by Ousmane Sembene. As funeral preparations begin for Pierre Henri “Guelwaar” Thioune (Thierno Ndiaye), rumor spreads that his death may have been an assassination in retaliation for his radical political beliefs and constant criticism of the current regime. When the heroic Guelwaar’s cadaver is stolen, Detective Gora (Omar Seck) begrudgingly investigates. he discovers that Guelwaar was a complicated man guilty of his own share of sins.