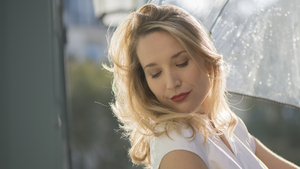 Famed New York area radio station WBGO Jazz 88.3 FM/WBGO.org, and Berklee present The Checkout – Live at Berklee. The series brings critically acclaimed, New York-based Berklee alumni back to their alma mater for concerts in the Red Room @ Cafe 939. The shows are webcast live worldwide in high definition video and available for on-demand listening at Checkoutjazz.org. They are broadcast in New York over WBGO-FM on a delayed basis, as a special edition of The Checkout, the acclaimed multimedia show featuring what’s new on New York’s jazz scene.

Sarah McKenzie hails from Melbourne, Australia; she earned a bachelor’s degree in jazz at Perth’s West Australian Academy of Performing Arts. With two critically acclaimed discs underneath her belt – Don’t Tempt Me and Close Your Eyes (2012 Best Jazz Album ARIA Winner)– she began attracting the attention of many international jazz stars visiting Melbourne.

With her eyes set on attending the Berklee College of Music in Boston, she participated in one of the college’s off-site jazz camps at the Umbria Jazz Festival in 2012, where she won both a full scholarship at the prestigious music school and an opportunity toperform at the festival. She graduated from Berklee in May 2015 with a degree in jazz performance. Sarah McKenzie has performed at jazz´s iconic places, the festivals in Monterey, Juan-les-Pins, Marciac and Perugia, Dizzy´s and Minton´s in New York, as well as the top clubs in Paris, London, Vienna, Munich and Sydney. Together with the Boston Pops Orchestra she premiered one of her compositions at Boston´s Symphony Hall. Last but not least, the Australian version of “We Could Be Lovers” won the Bell Award for Best Australian Vocal Album. Impulse! Label has released “We Could Be Lovers” worldwide in Spring 2015.