The Brothers Four with The McGuire Brothers Opening 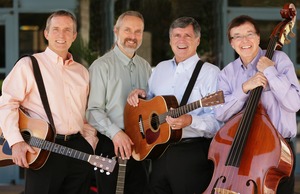 The Brothers Four will be performing Friday, Nov. 8, 7:30 p.m., at the Original Congregational Church in the center of Wrentham. 50 Great Years! Now proudly celebrating their Golden Anniversary! The smooth musical sounds of The Brothers Four have delighted millions for five exciting decades. Folk Songs and Love Songs from America, Europe, Africa and Asia round out a fabulous repertoire of acoustic tunes old and new.

The Brothers Four have played thousands of college concerts, serenaded four U.S. presidents at the White House, appeared at countless Community Concerts, performed with symphony orchestras and jazz stars and entertained in dozens of foreign countries. Internationally acclaimed, they are truly "America's Musical Ambassadors to the World." Musical million-sellers for The Brothers Four include such releases as Greenfields, Yellow Bird, Try to Remember, Across the Wide Missouri. Their hit recording of The Green Leaves of Summer from the motion picture "The Alamo" was nominated for an Academy Award and they performed the song at the awards presentation for the global network telecast.

Fraternity brothers at the University of Washington in Seattle, The Brothers Four began singing together in 1956 and by the 1960s they had become America's Musical Ambassadors to the World. They were pioneers in the musical movement which came to be know as the "folk revival", and one of the few groups from those times still performing today, they remain one of the best known and most popular. Their all-acoustic presentation consists of guitars, banjo, mandolin, upright bass, and of course the trademark rich blend of their four voices. An evening with this quartet is an unforgettable time of pure, acoustic music and entertainment.

The lineup of The Brothers Four for this concert will be Mike McCoy, a veteran folk performer and singer/songwriter, a native of Washington State who has performed with The Brothers Four on special recording projects and occasional stage presentations since the late 1960's; original Brothers Four member John Paine coming out of retirement while Karl Olsen fulfills a previous commitment; Washington State's Mark Pearson, guitarist, banjo player extraordinaire and singer/songwriter who has been such a strong and consistent part of the Group's signature sound since he originally joined in the late 1960's; along with Founding Member, Seattle native, Bob Flick, bass player, group leader and singer/songwriter.

Opening for The Brothers Four will be The McGuire Brothers, a very popular local group. The McGuire Brothers consist of Mike and Sean McGuire on acoustic guitars and drummer Dean Winslow, playing a mix of covers from the 1940s to the present. Many people in the Wrentham area have enjoyed the McGuires for years, and we expect you will too.

Tickets for the concert are $35 in advance and $40 at the door, available at the church office, 508-384-3110, or at www.musicatocc.org. The event will be in the Sanctuary at the front of the church with entry from the door on Dedham Street (Route 1A). Parking is available behind the church and in the lot across the street. For more information and to be added to the mailing list, visit the website or contact Ken Graves, 508-384-8084, occmusic99@gmail.com.