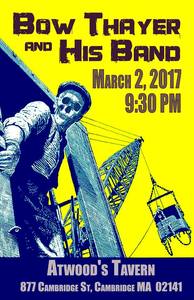 Bow returns to his home city from Vermont for a night of modern mountain music with his band. Music starts at 10 PM.

Bow Thayer has been singing and writing songs for as long as he can remember. Making music is who he is. He has lived up to his reputation as a sublimely gifted artist by pursuing a creative vision that seeks to lead Americana music into the future. Finally gaining national recognition, American Songwriter says this "onetime Levon Helm compatriot is the best artist to come from New England in recent years."

Bow made a name for himself in Boston with 7 League Boots, a rock/reggae band that shared the stage with the likes of Fugazi, The Mighty Might Bosstones, and Pearl Jam. Fifteen years ago he made a life-altering decision to leave the city for the Green Mountains of Vermont. It was there that he explored the Delta blues playing slide guitar for the original Elbow and began a relationship with the banjo--both in the bluegrass group, The Benders, and on his own--that continues to this day.

Bows music is always evolvingfrom luscious backwoods folk rock to the sonic exploration of his last album of all original material, Sundowser, that was co-produced and engineered by three-time Grammy winner Justin Guip (Levon Helm) and crafted on an instrument Bow created--the Bojotar--in a studio he built with his own hands. As No Depression puts it, "You want inventiveness....I offer Bow Thayer."

Bow's newest release, The Source and The Servant, is a tribute to two legends that have influenced his development as an artist: Dock Boggs and Mississippi Fred McDowell. But this record is just not simply a homage to the foundations of American music. Bow has re-invented these songs with new arrangements and lyrics, and performs most of them on different acoustic and electric versions of the Bojotar, a stringed instrument that incorporates elements of the banjo, resonator guitar, and conventional guitar. The electric version is currently available for sale from the Eastwood/Airline Guitar Company.

While out on the road, Bow had the joy of introducing the Bojotar to fans and friends alike, including some of his musical peers and heroes such as Bela Fleck, Richard Thompson, The Steep Canyon Ramblers and Warren Haynes. Having played with these music luminaries as well as Levon Helm, John Hiatt, Booker T, and Ringo Starr, Bow has seen his fair share of travel across these United States of America and the World at large and plans to do more while supporting his records that feature his tales, truths and fantasies about the human condition.