The Boston Red Sox and WWII 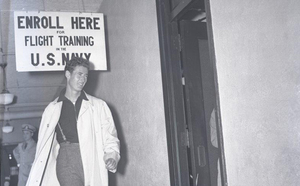 In this 75th anniversary of the end of World War II, join Boston Red Sox historian Gordon Edes and a panel of distinguished authors to discuss the role of Major League Baseball players from Boston in the conduct of that historic conflict. The story touches upon Ted Williams, a Naval flight instructor who would later fly combat missions for the Marines in the Korean War, but also tells of compelling acts of sacrifice and bravery performed by other big-leaguers from Boston, including Si Rosenthal and Earl Johnson of the Red Sox and Warren Spahn of the Braves.

Please note, this is an online event held on the video conference platform, Zoom. Registrants will receive an email with links to join the program.