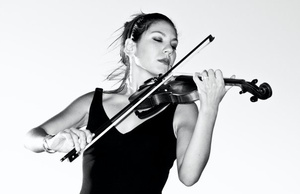 About this event
Join us for the second concert of the Boston Festival of New Jewish Music, a free monthly concert series presenting original music drawing from the Jewish cultural experience. Hosted by BackRoom at The Boston Synagogue, co-presented by JArts, and live-streaming everywhere, the Boston Festival of New Jewish Music highlights the best in Jewish-influenced music by composers and performers who live right here in our own backyard.
All concerts will be performed live at the Boston Synagogue and live-streamed.
---
Season 1. Concert 2. Yaeko Miranda Elmaleh
Violinist Yaeko Miranda Elmaleh has performed at TD Garden alongside Stevie Wonder, Hines convention with Bernadette Peters and the off Broadway musical "Shlemiel the First" in NY.
As a member of the Klezmer Conservatory band she has performed in venues such as Avery Fisher Hall, Walt Disney Concert Hall, Barclay's and many more throughout the United States, Canada and Mexico. Most recently she participated in the ‘Eternal Echoes’ project with Itzhak Perlman and the Klezmer Conservatory band which included the documentary for PBS's great performances and shows such as Prairie Home Companion. She's the founder of her own ensemble, a group that plays a blend of Latin, Jewish, Klezmer/Roma inspired music with an edge.
Her multicultural background, unique style along with training in classical and world music, inspire Yaeko to use her playing as a way to heal, soothe and transcend.

Event is FREE, however, we strongly suggest donating $10-$20 so we can keep bring you these wonderful programs.

NOTE. All attendees 12 & older need to show proof of vaccination & all attendees must be masked.The synagogue COVID protocols are guided by the CDC, state & city guidelines.