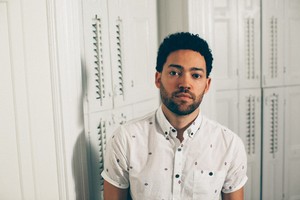 Taylor McFerrin is a producer, composer, pianist, DJ, and performer based in New York City who released his first full length LP, Early Riser, in 2014.

His musical style is influenced by ’60s and ’70s soul, hip-hop, free-form jazz, and electronic music. By playing all of the instruments on his productions and sampling and chopping up his live takes, the Brooklyn-based musician has found a sound that bridges myriad musical worlds and draws the listener into a constantly shifting soundscape.

Early Riser features guest performances from Thundercat, Robert Glasper, Nai Palm (Hiatus Kaiyote), Emily King, RYAT, Marcus Gilmore, and Bobby McFerrin, Taylor’s father and jazz legend who teams up with Brazilian master César Camargo Mariano for a track. His ability to create and evolve musically by drawing inspiration from all corners of his life translates into music of exceptional honesty, emotional directness, deep sophistication, and effortless style.
Denitia is a singer-songwriter and producer based in New York City. Hailed as “the epitome of soulful,” by the Fader, she is known for her work as a solo artist and with the duo Denitia and Sene.

Denitia’s solo effort, Ceilings, released July 2017, mixes her trademark atmospheric electronic production with live instrumentation, earning comparisons to acts such as Blood Orange, St. Vincent, and Beach House. Her lead single “Waiting” was declared one of the best songs of the summer by the Guardian, and the EP has been lauded by Pitchfork as “her most fully formed solo effort so far.”
Admission: $10 in advance / $12 general admission / $25 VIP (standing room only)