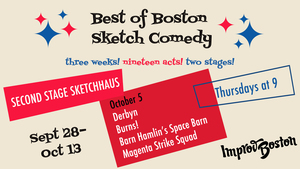 LAST WEEK for The Best of Boston Sketch!

For the first time in the history of The Best of Boston Sketch Comedy, we have gotten too big for a single stage to contain us! This fall, we've got nineteen different comedy acts across three weeks and TWO DIFFERENT STAGES! BOBS is pairing with ImprovBoston's premiere weekly sketch comedy show SketchHaus to bring you the most amazing cavalcade of comedy you've ever seen!

Second Stage SketchHaus presents the best in newer and experimental sketch comedy! Offbeat acts, solo shows, and groups making their Best of Boston Sketch debuts will be making you laugh in ImprovBoston's studio space! We're keeping the laughs going with three of Boston's most amazing indie teams: Unbecoming! Gift Horse! And the absolute bonkers weirdness of The Rekcus!

Don't miss a second of this amazing night or this killer comedy festival! Grab tickets early and let's all have fun!