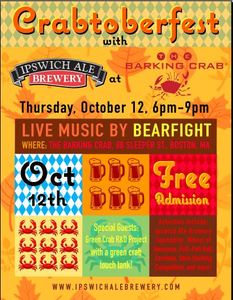 On Thursday, October 12th, 2017 from 6:00PM to 9:00PM, The Barking Crab, Boston’s favorite urban clam shack, will host an exclusive CrabtoberFest with Ipswich Ale. Guests can enjoy a night of crabs and beer in the iconic red and yellow tent, which will be transformed into a beer garden, while enjoying live music from Bearfight, the Ipswich Ale Brewery Tapmobile, Wheel of Awesome, Putt-Putt Golf, Cornhole, Stein Hoisting Competition, and more.

In addition, the Green Crab R&D Project will have its touch tank set up for attendees to explore with volunteers from the organization onsite to talk about the importance of decreasing the population of green crabs in the Ipswich.


About The Barking Crab:
Located on the edge of Boston’s historic Fort Point Channel, The Barking Crab has become one of the city’s best-loved meeting and eating spots. 2014 marks our twentieth year of operation. Opened in May of 1994 as an outdoor summer restaurant, we were
known for our first three years as Venus — Seafood in the Rough. After a successful second season, the restaurant expanded into the adjoining Neptune Lobster and Seafood Market, adding a wood-burning stove and becoming a year-round operation. Not the “typical” Boston seafood restaurant, The Barking Crab offers the casual atmosphere of a coastal clam shack in a funky urban setting, with a marina alongside for easy access by water, and all the exciting resources of Boston only a short walk away. Our menu concentrates on fresh seafood and offers our local take on the urban New England Clam Shack. Our wait and bar staff are cool, friendly and knowledgeable. And we can accommodate you whether you’re dining alone or arriving with two dozen of your closest friends. Come join the fun! The Barking Crab is located at 88 Sleeper Street, Boston, MA 02210. For more information please call The Barking Crab at 617.426.2722 or visit barkingcrab.com.

About Ipswich Ale
Residents of Boston’s North Shore were first introduced to Ipswich Ale during the spring of 1991. With 25 years of history behind it, Ipswich Ale has been in existence longer than nearly every other craft brewer in New England. Since that time, the Ipswich Ale
portfolio of brands have developed into a tradition shared by not only the residents of eastern Massachusetts, but across New England.