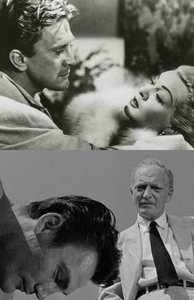 Part of our Play It Cool annual summer rep series!

This year we are focusing partially on ‘Hollywood on Hollywood’ as we prepare for the new movie ‘Once Upon A Time in Hollywood’ which opens July 26!

The Bad and the Beautiful: Unscrupulous movie producer Jonathan Shields (Kirk Douglas) is a child of Hollywood who ruthlessly toils his way to the top of the studio system, discarding movie star Georgia (Lana Turner), director Fred Amiel (Barry Sullivan) and writer James Lee Bartlow (Dick Powell) along the way. Although Shields manipulates them and leaves each in despair, they find success in Hollywood, thanks in part to Shields, and must decide whether or not to repay him when he offers them a collaborative project.

The Big Knife: Movie star Charlie Castle (Jack Palance) draws the ire of Hollywood producer Stanley Hoff (Rod Steiger) when he refuses to sign a new seven-year contract. Castle is sick of the low quality of the studio’s films and wants to start a new life. While his estranged wife (Ida Lupino) supports him in the decision, Castle’s talent agent (Everett Sloane) urges him to reconsider. When Castle continues to be uncooperative, Hoff resorts to blackmail in order to get his way.