The American Inspiration author series and WGBH present: Holly George-Warren with Janis: Her Life and Music 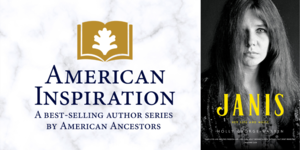 A live studio interview (and live stream) plus musical performance

The acclaimed singer Janis Joplin (1943-1970) passed into legend as a brash, impassioned soul and one of the most extraordinary voices in rock history. In a blazingly intimate biography, Holly George-Warren provides a revelatory portrait of this erudite musician, based on unprecedented access to Joplin’s family, friends, band mates, archives, and long-lost interviews.

Holly George-Warren is a two-time Grammy nominee and the award-winning author of sixteen books, including the New York Times bestseller The Road to Woodstock (with Michael Lang) and the biographies A Man Called Destruction: The Life and Music of Alex Chilton and Public Cowboy No. 1: The Life and Times of Gene Autry. She has written for numerous publications, including The New York Times, Rolling Stone, and Entertainment Weekly. George-Warren serves on the nominating committee of the Rock & Roll Hall of Fame and teaches at the State University of New York at New Paltz.