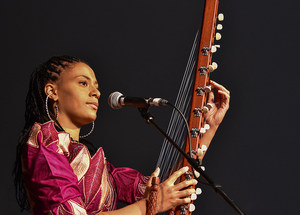 Sona Jobarteh is the first female kora virtuoso to come from a West African Griot family. Breaking away from tradition, she is a pioneer in an ancient, male-dominated hereditary tradition that has been exclusively handed down from father to son for the past seven centuries. Renowned for her skill as an instrumentalist, distinctive voice, infectious melodies and grace onstage, Jobarteh has risen to international success following the release of her critically acclaimed album Fasiya in 2011. Jobarteh also founded The Gambia Academy of Music and Culture.