The 2022 Slomoff Lectureship with Ryan McCannell 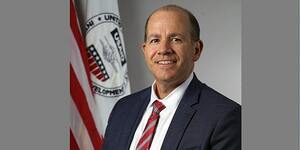 President Biden’s interim National Security Strategy commits the United States to “provide foreign assistance to promote global stability,” noting that “global development is among our best means to articulate and embody our values, while simultaneously pursuing our national security interests. In short, our foreign assistance programs and partnerships are both the right and the smart thing to do.” But what role does global development actually play in preventing conflict, countering violence and misinformation, and promoting global stability aligned with America’s democratic values? How have these international efforts evolved in recent years given the challenges we now face in our own country? For this year’s Benjamin and Sylvia Slomoff and Judith Green Loose Lectureship in Conflict Resolution, please join Mr. Ryan McCannell, Director of the U.S. Agency for International Development’s Center for Conflict and Violence Prevention, to explore these questions in greater detail. Mr. McCannell will describe how recent changes to U.S. foreign policy and strategy are making an impact on the way that USAID and its partners work to prevent conflict and promote stability in some of the world’s most challenging environments.

Ryan McCannell Director of the Center for Conflict and Violence Prevention (CVP) at the U.S. Agency for International Development (USAID).

Ryan McCannell is the director of the Center for Conflict and Violence Prevention (CVP) at the U.S. Agency for International Development (USAID). As part of the world’s premier bilateral development agency, CVP advances U.S. national security by improving the capacity of countries to prevent and mitigate sources of fragility, instability and conflict.

From 2016-2018, Mr. McCannell served as the USAID faculty instructor at the U.S. Army War College and senior advisor to the Peacekeeping and Stability Operations Institute (PKSOI) team at Carlisle Barracks, Pennsylvania. Previously, he served as a democracy specialist, senior advisor, and division chief for Conflict, Peacebuilding and Governance in the USAID Bureau for Africa. Before joining USAID in 2004, Mr. McCannell spent eight years supporting African political development programs at the National Democratic Institute for International Affairs (NDI) in Washington D.C. In 2002-03, he served as NDI’s chief of party in Benin and Togo, where he organized training for political parties prior to elections in those two countries.

The Benjamin and Sylvia Slomoff and Judith Green Loose Lectureship in Conflict Resolution, sponsored by UMass Boston alumnus Ben Slomoff, is an annual event that brings together leading scholars and practitioners advancing the field of conflict resolution.