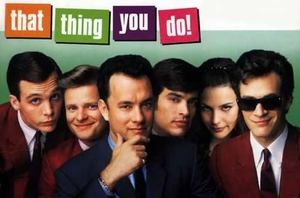 Synopsis:
Wily band manager Mr. White helps a small town band achieve big time success when they release a Beatles-style pop song in 1964. Pennsylvania band the "Oneders" become a sensation after their drummer breaks his arm, and is replaced by jazz enthusiast, Guy Patterson, who injects something a bit different into their music.

Notes from our Programmer, Jennifer Sullivan:
I adore this movie….and now the title song is stuck in my head for the billionth time. Set in 1964, That Thing You Do! was Tom Hanks’ first film that he wrote and directed. The movie follows the fictional band The Oneders (pronounced “Wonders” not “O need ers”). The plot is the fairly predictable rise and fall of a one hit wonder, but the attention to detail makes it so enjoyable to watch.

The song itself “That Thing You Do” is played eleven times during the movie. Being a 60’s music obsessive, I don’t mind the repetition at all, but I do know this frequency annoys some people, which I think is kind of the point. The title track was written by Adam Schlesinger of Fountains of Wayne and sung by Mike Viola (look him up, he’s fantastic). The actors trained in performing so that they looked like they could play their instruments, but the majority of the performances were overdubbed.

The film alludes to Beatle-esque moments in their rise to fame, and also lesser known bands who on the way up had to perform at town fairs or play the house band in a beach party movie. The witty retorts, particularly from Lenny (Steve Zahn) remind me of the footage of Beatles’ press conferences.

My favorite scene is when the band first hear themselves on the radio. Try not to smile during that scene. It’s a sweet, funny, and at times heartbreaking movie that I hope you love as much as I do.