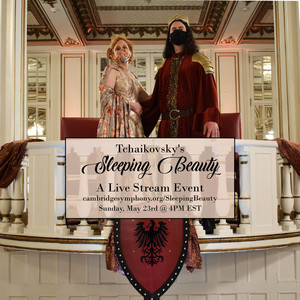 Music Director Cynthia Woods will lead the CSO in a very special live stream production of Tchaikovsky’s ballet, Sleeping Beauty, on Sunday, May 23 at 4 pm. The live YouTube video will be embedded on this webpage at that time.

Inspired by the plot of Charles Perrault's fairy tale, Tchaikovsky’s Sleeping Beauty is a magical story in music and dance first performed at the Mariinsky Theatre in St. Petersburg in 1890. Tchaikovsky's gorgeous music is fully on display in this score, with a wealth of melodies, great rhythmic vitality, charming character dance pieces, and rich orchestration.

Tchaikovsky was supremely satisfied with his enchanting achievement, writing that "the music from this ballet will be amongst my best works. The subject is so poetical, it is so suited for music, that in composing it I was utterly absorbed, and wrote with a fervor and passion which always result in work of merit.”

The CSO rises to the occasion with an original, virtual production filmed at the Fairmont Copley Plaza Grand Ballroom, with CSO musicians performing the music from their homes in the style of our Holiday Pops 2020 event. The performance will feature dancers from City Ballet of Boston, alongside their resident choreographer, Gianni Gino Di Marco, as Production Director, with special appearances from the students of the Young Artist program of Tony Williams Dance Center.

From City Ballet of Boston

Betsy Boxberger Khalil as The Lilac Fairy (Fairy of Wisdom)

Amane Takaishi as The Violente Fairy (Fairy of Courage)

Jean Robens Georges as The Wolf

Wiliam Whitney as The King

Cynthia Woods as The Queen

The CSO 2020-21 season is supported by the Massachusetts Cultural Council. We are grateful to the Cambridge Community Foundation and the City of Cambridge for generously funding this project.