Talks with Trident: Cathy Zane and E.C. Frey in Conversation 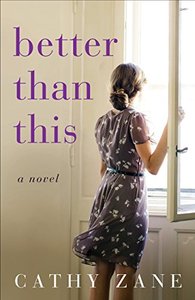 Join us for a night discussing shared themes and the craft of writing a novel with two acclaimed female authors. Though their two books are in different genres, they both use fiction to shed light on serious issued that women face in relationships and in the workplace.

On the surface, Sarah Jenkins appears to have it all: a handsome, wealthy, and successful husband, a precocious five-year-old daughter, and a beautiful home in an affluent Seattle neighborhood. Her quirky best friend and fellow high school teacher, Maggie, marvels at her luck—and envies her happiness.

But Sarah is far from happy. She feels empty and on edge, harangued by a critical inner voice—and as the truth about her marriage and details of her past emerge, her “perfect” life begins to crumble. But just when it seems all is lost, a long forgotten, unopened letter changes everything, and with the support of friends, Sarah begins to rebuild her life. Can she quiet the critical voice in her head and learn to value herself instead?

Long ago, Heather left her old life behind. Now, she has everything: a marriage to a handsome executive, a managerial human resources position in a powerful multinational, and a beautiful daughter. And she will do anything to keep it that way. But everything has a price. When a bullet ends the life of another woman―an ex-employee whom Heather helped fire―it sets off a chain of events that jeopardizes everything for which Heather has worked. Events of Heather’s past soon collide with her company’s wrongdoings, and she must risk everything to expose them. But all she’s ever known is the peril of being visible. Frightened and desperate, Heather calls upon her constant childhood friends―friends who long ago saved her from a life of pain―and, together, they will once again face the events of a traumatic night that each has sought to forget. Because sometimes the only ones who can save you are those with whom you share your deepest and darkest secrets―those who know that fear is the price of silence.

Cathy Zane spent her childhood on the beaches of St. Petersburg, Florida and attended Nursing School at the University of Florida. She moved west to San Francisco a week after graduation and worked in Labor and Delivery for 15 years before returning to graduate school to pursue a second career as a psychotherapist. Since completing her graduate degree in 1999, she has worked extensively with children, teens, and their families. She was married, raised two sons, divorced, and is a new grandmother.

As a writer, Cathy draws on her experience in both her careers as well and her own life to create narratives of growth and healing. A lifelong reader, she believes in the power of story not only to entertain, but also to inspire, connect us to our common humanity, and instill hope. In addition to reading and writing, Cathy enjoys travel, movies, theatre, and hiking in the natural beauty that surrounds her Northern California home. Previous writing includes articles, short stories, and essays. Better Than This is her debut novel.

Elizabeth Campbell Frey has worked in Fortune 500 companies in positions dealing with systems analysis/project management, human resources, employee relations, and affirmative action. After surviving cancer, she switched gears and, during her studies for a master’s in history and non-Western cultures, she focused on water rights and resources and completed a thesis on the Doctrine of Discovery and land issues in Indian country. Born in the Philippines to chronic expat parents, she has lived in too many places to name and now lives in Texas Hill Country with her husband, two gypsy-hearted kids, dogs, cows, chickens, a horse, and a swarm of transient, kamikaze hummingbirds. Learn more at www.elizabethcampbellfrey.com.

Reddit
13/11/2018 19:00:00 13/11/2018 20:00:00 America/New_York Talks with Trident: Cathy Zane and E.C. Frey in Conversation Join us for a night discussing shared themes and the craft of writing a novel with two acclaimed female authors. Though their two books are in different genres, they both use fiction to shed light ... Trident Booksellers & Cafe, Boston, MA 02115 false DD/MM/YYYY