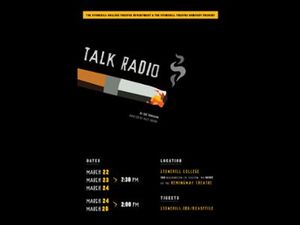 
Easton, MA – THE STONEHILL THEATRE COMPANY, under new Artistic Director, Matt Greene, presents Talk Radioby Eric Bogosian. Barry Champlain, Cleveland's controversial radio show host, is on the air doing what he does best: insulting the pathetic souls who call in the middle of the night to sound off. The most frightening thing? They love it. In fact, Barry's show is so popular it's about to go into national syndication, and his producer is afraid that Barry will say something that will offend the sponsors. This, of course, makes Barry even more outrageous. Disturbing, funny, moving, off-beat, and totally entrancing, Talk Radio was adapted into a riveting film by director Oliver Stone and revived for Broadway audiences in 2007 - earning two Tony Award nominations. "A compelling work that draws you straight into the heart of its fringe world. It makes the call-in show a metaphor for America's lost souls." - New York Newsday


Performances will be held at the HEMINGWAY THEATRE on the Stonehill College campus, 320 Washington Street, Easton, MA 02357.

Now on sale online a www.stonehill.edu/boxoffice