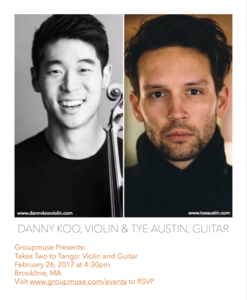 Join us at the salon of Diane Souvaine for a passionate program of tango music with international award-winning musicians, Danny Koo, violin and Tye Austin, guitar. The program will feature music from Carlos Gardel, Villa-Lobos, and Astor Piazzola. Groupmuse concerts are inspired by 19th century salon concerts, which featured musicians such as Mendellsohn, Chopin, Schumann, and others in the homes of the rising middle class. Groupmuse's new app allows you to order live music to your home similar to an Uber car. If you'd like to book this duo for a Groupmuse concert in your home, feel free to visit their site at www.groupmuse.com or contact Tye directly at info@tyeaustin.com. Hope to see you there!

Danny Koo, violin:
“Unstinting in energetic projection every step of the way” (Calgary Herald), Chicago native and violinist Danny Koo is an internationally renowned chamber musician, soloist, and concertmaster. An avid chamber musician, Danny is the newest member of Ensemble DITTO, an extraordinary group with a vision to introduce new audiences to the chamber music repertoire. Beginning in the 2016-2017 season, Danny joined Hub New Music, a Boston-based ensemble actively performing and commissioning the latest generation of composers. He was featured as a ‘rising star’ at the Summerfest at La Jolla, and he was an artist-in-residence at the Banff and Lake Champlain Music Festivals in 2016, which included a performance with the Burlington Chamber Orchestra. The 2017-18 concert season will feature Danny at the Sejong Chamber Hall, Kennedy Center, Jordan Hall, and a South Korean tour with Ensemble DITTO; and in residencies at Martha’s Vineyard, Burlington College, University of Michigan, UC Riverside, New England Conservatory, and the Museum of Fine Arts - Boston. Danny received his Bachelor and Masters degrees from New England Conservatory, studying with Donald Weilerstein, Soovin Kim, and Malcolm Lowe, and was the recipient of the Beneficent Society Scholarship and Vernon Scholarship. He also teaches at NEC's Preparatory School and he coordinates the Women’s Lunch Place Concert Series as an early member of Kim Kashkashian’s ‘Music for Food’ initiative, a program that aims to create tangible change in the world through music. Visit www.dannykooviolin.com for more information.

Tye Austin, guitar:
Hailed by NBC News as a guitarist who “…can make the guitar sing like it was invented to be in his hands,” native Oregonian Tye Austin recently made his Royal Albert Hall debut in London, England after winning first place in the 2016 Grand Prize Virtuoso International Music Competition. He also won first place in the 2013 American Protege International Music Competition at Carnegie Hall. Tye has performed with Grammy-winning musicians such as Sharon Isbin, Eliot Fisk, and Bela Fleck, and he’s been interviewed on National Public Radio. Psychology Today praised the way, “Tye Austin led us (the audience) into a musical embrace,” following his debut performance at the historical Boston Athenaeum. He is also an accomplished composer/arranger dedicated to expanding the guitar repertoire. The 2016-17 concert season will see the premiere of new chamber music he composed for the Boston Guitar Orchestra and his newly-formed Back Bay String Quartet, which aims to bridge the divide between plucked and bowed string instruments. Thanks to a generous patronage and private scholarship, Tye graduated from the New England Conservatory with his Master of Music degree under the tutelage of legendary maestro Eliot Fisk (the last student of Andres Segovia). Tye plays a custom-made 2015 Steve Connor Guitar from Cape Cod, MA. Visit www.tyeaustin.com for more information.