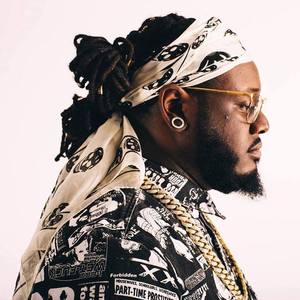 With 60 hit songs under his belt and two Grammy trophies on his mantle, T-Pain has cemented himself as one of the most influential artists of all time. In the fall of 2013, a rejuvenated T-Pain returned with one of his biggest hits to date, the DJ Mustard-produced single "Up Down (We Do This All Day)" featuring B.o.B. After returning to his familiar spot in the top ten of the charts for 28 straight weeks, T-Pain continued to soar with his club smash "Drankin' Patna" in 2014.

Currently preparing for his fifth album, "Stoicville: The Phoenix," T-Pain promises that he's back to being the artist that he originally intended to be. "I want to be able to say that I put out an album that I believed in and that I liked," he says. "Every song on the album is something that came out of my heart." With his refreshed spirit, T-Pain has spanned the globe on his "I AM T-PAIN" tour, selling out dates in the United States, Europe, Australia and all points in between. Over the course of this tour, fans surely recognized the quality of his music, his captivating energy, and many of the positive changes he has made. T-Pain has lost much of the weight he put on during his down time and he even shaved off his trademarked dreadlocks. "That was one of the hardest things to change about me," he admits. "But I figured that if I could make that big of a change, everything else would change immediately, and it did."

With many artists in the marketplace building successful careers borrowing from a sound that T-Pain helped create, it's only right that he return to claim his throne. Only this time, don't expect him to take another break, he's going as hard as ever.