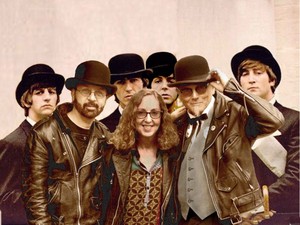 When: Saturday July 15, 2017 from 8:00 - 10:00 p.m.
Who: Bird Mancini and T Max
What: BIRD MANCINI and T MAX team up to each perform their unique music separately – and then combine their talents with a set of songs made famous by The Beatles. Critically acclaimed and ASCAP/Boston Music Award nominees, BIRD MANCINI were twice named among the Top 10 Year's Best by Metronome Magazine. They are a fusion of blues-tinged rock, Latin-flavored bossa nova, country-folk balladry, and woolly psychedelia, with lush vocals, guitar, accordion, and a variety of percussion, bells and whistles. They’ve toured the West Coast and performed for the International Pop Overthrow Festival in Boston, NYC, and The Cavern Club in Liverpool, England.

At the age of 13 T MAX's mom brought home an acoustic guitar, unsure of which of her three sons would end up with it. Two years later T was making more money playing in New York bars than he could spend. After transplanting to New England T founded the area's longest running music magazine (The Noise). He has nine solo releases with his latest, The Portal's Rhyme, still getting radio airplay in New England. North Shore diva Julie Dougherty says, “An evening spent with T Max is like being with an old friend you haven't seen in a while…a somewhat crazy old friend with child-like openness that pulls you right in”.
Where: Saint Susanna Parish (262 Needham Street, Dedham, MA)
Cost: Charitable Donations Accepted