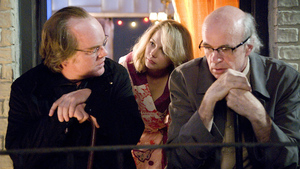 With actor Tom Noonan in person!

The directorial debut of Charlie Kaufman, the Academy Award-winning writer of Being John Malkovich, Eternal Sunshine of the Spotless Mind, and Adaptation. Theater director Caden Cotard (Academy Award winner Philip Seymour Hoffman) is mounting a new play. His life catering to suburban blue-hairs at the local regional theater in Schenectady, New York is looking bleak. His wife Adele (Academy Award nominee Catherine Keener) has left him to pursue her painting in Berlin, taking their young daughter Olive with her.

Worried about the transience of his life, he leaves his home behind. He gathers an ensemble cast into a warehouse in New York City, hoping to create a work of brutal honesty. He directs them in a celebration of the mundane, instructing each to live out their constructed lives in a growing mockup of the city outside. He casts all the people in his life, including hiring a man (Tom Noonan) to play himself. The years rapidly fold into each other, and Caden buries himself deeper into his masterpiece, but the textured tangle of real and theatrical relationships blurs the line between the world of the play and that of Caden's town deteriorating reality.