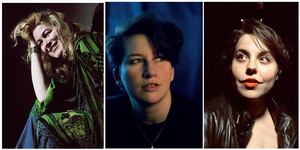 Whether you’re in love, out of love, or somewhere in between, Buskin, Cattaneo and Maxwell have got the songs for you this Valentine’s Day.

The daughter of two musicians, Brooklyn-based songwriter Sophie Buskin has been singing professionally since age 4. Aside from an extensive jingle and ad background, she has supported legendary artists like Paul Shaffer, Little Anthony, Mason Jennings, Jewel, and Buskin & Batteau. She has just released her first six song CD titled “Sweet Creature.”

New York raised, Nashville based singer/songwriter Kirsten Maxwell hit the stage at age 5 at an opera house in NYC. Since then she has shared stages with such musical greats as Melissa Etheridge, Ferron, and Karla Bonoff, and performed at The Cutting Room in NYC with Paul Shaffer. In September, Maxwell performed the single from her latest self titled EP on Good Day New York. Buskin and Maxwell will appear as a duo for a special Valentine's Day performance.

Susan Cattaneo is one of Boston’s most respected songwriters. A powerful singer and sophisticated writer, Susan combines vivid storytelling with a modern songwriter’s spin. Susan blends rock, folk and blues with a healthy dose of country. Call it New England Americana with a twang. Her latest album The Hammer and The Heart charted #1 on the Billboard Heatseekers chart and yielded a #1 song on folk radio and a top 10 album of 2017. Over the past two years, she has been a finalist or winner at some of the country’s most prestigious songwriting and music contests. This fall, she performed and won the 2018 Connecticut Folk Festival and was nominated for Best Americana Artist in the 2018 Boston Music Awards.