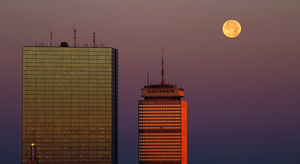 For the first time in 38 years, the Vernal Equinox (aka the first day of spring) will coincide with a full moon in Boston. At 5:58pm on Wed, 3/20, spring will officially begin with the Vernal Equinox, then approximately four hours later, at 9:43pm, the moon will become full. This will be the last “supermoon” of 2019 and forecasters are calling for clear skies in Boston.

An equinox occurs when the sun is directly over the equator and day & night is approximately the same length everywhere in the world. This happens twice a year (spring & fall).

The Super Equinox Worm Moon will begin rising over Boston at 6:35pm, with the sunset will occurring at 6:56pm. The moon rises in the east, so you're going to want to look that way. If you're trying to grab photos, go somewhere facing east with a picturesque foreground. Two well-known spots to watch a Boston moonrise are North Point Park in Cambridge and the BU Bridge on the Boston/Cambridge line.