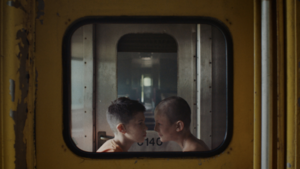 The 2018 Sundance Film Festival Short Film Tour is a 91-minute theatrical program of seven short films selected from this year’s festival, widely considered the premier showcase for short films and the launchpad for many now-prominent independent filmmakers for more than 30 years. Including fiction, documentary, and animation from around the world, the 2018 program offers a taste of what the festival delivers, from laugh-out- loud comedy to contemplative reflections of the world we live in.