Summer In The City Series: Movies by Moonlight 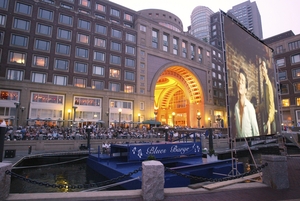 Summer nights are Beyond Compare at Boston Harbor Hotel, with themed musical evenings every Tuesday – Thursday starting at 6:00 p.m. As bands take to the barge, guests can dance and sing along to classic tunes with friends and family, making for a summer night to remember. Themed nights include Pop Soul Tuesdays, Rat Pack Wednesdays, Blues Barge Thursdays, and Movies by Moonlight on Fridays.
All Summer in the City events at Boston Harbor Hotel are open to the public. Live music begins at 6 p.m. Tuesday – Thursday and Friday evening movies begin at dusk.

The full Movies by Moonlight schedule is as follows:

Cheaper by the Dozen

Pirates of the Caribbean: The Curse of the Black Pearl