Summer Concerts at The Street 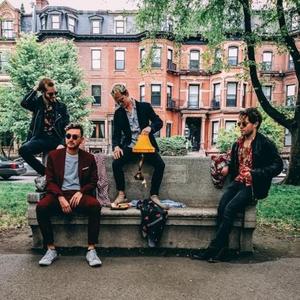 Note: No concert on July 4th

The Street, an outdoor shopping, dining, and entertainment destination located in Chestnut Hill, Massachusetts, is home to a variety of Berklee artists performing on Thursday evenings. Performances are held in the courtyard in front of Shake Shack.

GOLDSPACE, a producer and singer-songwriter duo based in Boston, Massachusetts, features a blend of future R&B and hip-hop.

Based in Boston, Massachusetts, the Martini Police are a rock band that hails from all around the world.

Cristy Alover is a soul, R&B, and pop singer-songwriter from Caracas, Venezuela. She is majoring in music business/management and songwriting at Berklee College of Music.

Lo Artiz, an independent artist born and raised in Miami, Florida, is a student at Berklee College of Music. Rooted in soul, her music seeks to disturb the comfortable and comfort the disturbed.

Pretty Saro is a four-piece bluegrass string band composed of students in the American Roots Music Program at Berklee College of Music.

Alex Maes, a singer-songwriter from Salida, Colorado, aims to spread positivity through her music, empowering people to create social change. Her songs have intricate melodies, strong rhythms, and creative grooves that are catchy, creative, and exhilarating.

Anastasia Charakidou is a Greek singer-songwriter who performs spirited yet heartfelt original songs with a pop improvisation flair. She is inspired by electropop, dance pop, soul, R&B, and funk.

Lil is a singer-songwriter known for her sultry voice and intriguing lyrics. She incorporates different genres, including neo-soul, jazz, indie, rock, and R&B, into her music.

Mom Rock is a hard-hitting, upbeat rock band based in Boston. They're known for their fun and energetic live sets consisting of eclectic original songs, a few oddball covers, and flashy monochromatic outfits.

Performing under the name Lick Neon, this collective has spent the past year making the rounds on the underground circuit, bringing Texas blues, slacker rock, and folk music to Boston bars and basements.

Angelo LeRoi is a 20-year-old singer, producer, and multi-instrumentalist from Altadena, California.