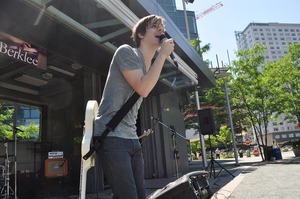 Originally a salt marsh on the Charles River between Boston and Cambridge, Kendall Square is now a growing 10-acre community. Join us this summer for a farmer’s market, food trucks, and Berklee artists performing on Tuesdays at lunchtime.

Brennan Hepler, a Pennsylvania native, moved to Boston to attend Berklee College of Music in 2015 and has lived there since. Hepler developed the persona Beane to publish his music and other creative endeavors.

Hannah Siglin is a singer-songwriter and guitarist.

Stacey Kelleher is an indie-pop singer-songwriter who is unafraid to say what she wants in her music. Blending electronic elements reminiscent of Dua Lipa and Halsey with acoustic guitars similar to those of Fleetwood Mac and Joni Mitchell, Kelleher fuses genres to create her own unique sound.

Tyson Jackson first discovered his love of music at age 3 in his hometown of West Palm Beach, Florida, and has studied with world-renowned artists including Ron Blake, Nona Hendryx, and Terri Lyne Carrington.

Anastassiya Petrova is a jazz pianist and organist from Kazakhstan and a participant in many international festivals.

Born in 1994 in Havana, Sheila del Bosque is one of the most in-demand young flutists in Cuba. Her music features contemporary and traditional Afro-Cuban music with the influence of European and jazz ingredients.

John Michael Bradford presents a showcase of jazz and funk music, as well as original compositions and arrangements. Like so many before him, his passion for music was sculpted by the spirit, sounds, and fate of New Orleans, Louisiana.

Sophia Gripari, a native of London, is a singer-songwriter and multi-instrumentalist based in the United States. She focuses primarily on her voice, songwriting, guitar playing, and electronic digital instrument skills.

Fryderyk Hoang Dong, born in Poland to Vietnamese parents, began studying classical music at age 6. Majoring in piano performance at Berklee College of Music, he is working on an original repertoire that draws from jazz, soul, fusion, and minimal music.

Mar Fayos is a jazz singer from Barcelona, Spain. She performs jazz-fusion music with Latin, Mediterranean, and soul influences. For this performance, she will present a new formation, her quartet, and will offer a special repertoire designed for this performance.