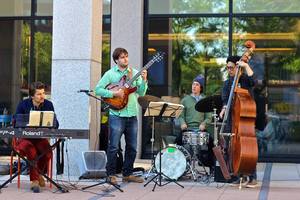 Note: No concert on July 4th.

Located at the crossroads of the Boston Marriott Cambridge Hotel and Kendall Station subway stop, and at the heart of the Massachusetts Institute of Technology campus, Kendall Center offers a lovely introduction to Cambridge. Whether on your way home from work, or heading to dinner, make a stop by Kendall Plaza on Thursdays at 5:00 p.m. to listen to students perform a mix of jazz standards and originals.

Born in 1994 in Havana, Sheila del Bosque is one of the most in-demand young flutists in Cuba. Her music features contemporary and traditional Afro-Cuban music with the influence of European and jazz ingredients.

Faride is a singer-songwriter from the Dominican Republic who bases her music on melodies and rhythms from R&B, pop, and soul, fusing electronic pop with her Caribbean roots. She attends Berklee College of Music, majoring in music business/management.

Máximo Abraham, seeks to keep the fire of Argentinian rock alive through his own compositions as well as a few tribute songs to his idols.

A native of Bogotá, Colombia, Camilo Velez seeks to fuse the rhythms and enchanting melodies of the Andes Mountains with jazz and funk.

Cindy Latin is a pop and R&B songwriter with musical influences ranging from Stevie Wonder and Frank Ocean to Tori Kelly and John Coltrane.

Safiya Leslie is a vocalist and New York City native who is pursuing a dual degree in music production and engineering and music business/management at Berklee College of Music.

Vivian Valls, known by many as ViVi, is a female singer-songwriter, artist, and producer born and raised in Miami, Florida. Her first single, “Comp4urlove,” was released in February 2019 and is available on all streaming platforms.

Brennan Hepler, a Pennsylvania native, moved to Boston to attend Berklee College of Music in 2015 and has lived there since. A self-described soul singer-songwriter, Beane tackles his artistry head-on, including design, promotion, and management.